I have been facing issues with SSRS 2008 R2, The reports were freezing and not showing any data. Microsoft did not provide any support as SQL 2008 R2. MS anyways closed for any new enhancements SQL 2008 variants.

We upgraded to SSRS 2014, reports started working and data was rendered. Wait, now the toolbar started appearing in multiple rows. For smaller resolution screens, this was not acceptable. I could not find any solution or fix by Microsoft for SSRS 2014, though I could find a workaround that worked for me.

This workaround requires me to modify the ReportViewer.aspx file.

The folder name and path may differ based on the SQL Version and installation location, the path provided above is generalized.

Changing this option will try to Emulate the Report with version specified in order.
By Swarndeep Singh at 11:33 AM 1 comment:
Email ThisBlogThis!Share to TwitterShare to FacebookShare to Pinterest
Labels: Content, IE 11, Meta, Reporting Services 2014, ReportViewer.aspx, SQL 2014, SSRS, SSRS 2014

Recently I was working on one of the servers to analyze the performance using Performance Counters which were collected historically for a long period of time.

I noticed some of the needed counters were missing for the collection.

Now you got all of the file names needed, follow these steps to reload the counters.
It worked for me, I could see the counters. 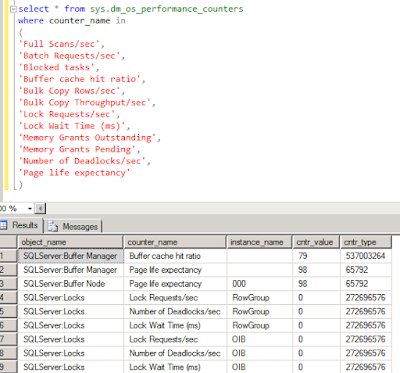 If you still see the issues, then please make sure that the registry keys as discussed above are accessible by Service Account of SQL Service. Then repeat steps between 2 and 4.
By Swarndeep Singh at 4:18 PM No comments:
Email ThisBlogThis!Share to TwitterShare to FacebookShare to Pinterest
Labels: Performance Counters, SQL 2008, SQL 2012, SQL 2014, SQL Performance
Newer Posts Older Posts Home
Subscribe to: Posts (Atom)