If an enterprise server has to be upgraded to boost performance then memory can be the first and foremost resource that can be considered as a quick and cheap upgrade. Memory is not only cheap , but also very easy to install. If server supports, memory can be added without bringing the server down for maintenance.

As name suggests, the data in these tables remain in memory when SQL Service is running. This does not mean that data will always vanish away when server is powered off or service interrupts. SQL Server keeps copy of data in Logs (write ahead log), if data has to be retained, the pages from log will be loaded back to memory optimized tables.

While defining the table you can specify whether the durability of the table will be Schema only or Schema and Data both.

These are the requirements for Memory Optimized Tables are:

Here is the small example to introduce with Memory Optimized OLTP/Table.


It is all done and ready to use. Though it is recommended to create resource pooling on memory for the database so that memory utilization can be maintained and monitored.

Take Database Offline and Online again to apply the changes

Please leave your feedback, if you like this article or have any comments, below.

Swarndeep Singh is a SQL Server Solutions Specialist with expertise in  Performance Turning, Database Designing, Cloud Computing, Database Security, Data Analysis, BI and Auditing. He uses scripting including T-SQL, Powershell and Python in his day to day work. He is also fond of working with other technologies like Postgresql, C#, Web Services, AWS and Azure.

In his free time he likes to write blogs on his blog at https://www.swarndeep.com. Swarndeep lives in Georgia, USA and working full time as Database Manager.
By Swarndeep Singh at 9:08 PM
Email ThisBlogThis!Share to TwitterShare to FacebookShare to Pinterest
Labels: AboutMe

A glance at SQL Server Statistics

Statistics are sometimes ignored when it comes to Performance Tuning. Statistics can play a big role in identifying recurring slowness.

Before executing any query, SQL Engine Optimizer should know in advance some information, like the number of records, page density, indexes etc. If updated information is available, the query optimizer will use best execution plan to execute the query.

Before go further on this, here is an example, an online store makes sure that they have enough stock in warehouse that is ready to ship to meet the demand. But their system is broken and online ordering system is unaware of stock quantities in warehouse, then probably online ordering system will order item directly from distributor which will take longer time for item delivery.

On the other hand if online store has outdated information that their warehouse has enough stock, the online order will be mistakenly sent to warehouse, which then be re-routed to the distributor.

Both of these scenarios have bad impacts because information was outdated somewhere.

This example may not fit 100% with SQL Server statistics but it is very close.

Let's take a look at SQL Server with same example. Store A has 10 warehouses in a state at different zip code locations. Store decided to merge all warehouses in one big warehouse to reduce overhead cost.

After the physical change, this information has been updated in database, by simply updating affecting zip codes to one zip code. Note that the index is built on Zip code. There is an pre-existing index on the zipcode column.

Order entry system complains that after merging the Zip codes, the system is little sluggish. The reason of this sluggishness lies behind mass updates. The reason behind this issue could most probably be outdated statistics. Let's take this example:

Query used the index as expected, let's look at the index statistics. See from the screenshot below the Estimated and Actual number of rows matches. What query optimizer estimated, same was returned. This sounds good.


Without making any further changes, without rebuilding the indexes etc., running the same query again should return 179,000 rows. Let's look at the same index execution plan created by query optimizer.

Query optimizer estimated only 1 row to be returned, though there were 179,000 rows expected.

Now, let's fix the statistic by updating it manually.

After updating the statistics the number of rows estimated by query optimizer are 179,000. This is what we wanted to see in execution plan.

If query optimizer sends wrong estimate then probably wrong execution plan can be picked which can cause some performance sluggishness.

Here is the query that can be used to find out how many modifications were made to statistics. This can probably help in devising a custom solution for some of the indexes which are updated throughout the day in production application.

The example above is very simple and probably you may not see any major difference in performance, it was just to demonstrate how to proceed with Statistiscs.

Auto Update Statistics Asynchronously: If while executing the query, the statistics found outdated by a ratio and statistics update request will be sent to engine in background. 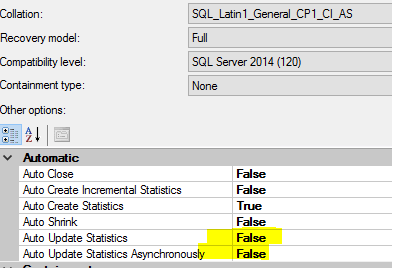